Conan Doyle for the Defense

“A wonderfully vivid portrait of the man behind Sherlock Holmes . . . Like all the best historical true crime books, it’s about so much more than crime.”—Tana French, author of In the Woods

One of USA Today’s “Five new books you won’t want to miss!”

“I cannot speak too highly of this remarkable book, which entirely captivated me with its rich attention to detail, its intelligence and elegant phrasing and most of all, its nail-biting excitement. I read it from dawn to dusk, near-starving myself in the process, so eager was I to find out who did the murder, why the Glasgow police were such monsters and why Sherlock Holmes’s creator was such a genius.”—Simon Winchester, author of The Perfectionists and The Professor and the Madman

“The author’s exhaustive research and balanced analysis make this a definitive account, with pertinent repercussions for our times.”—Publishers Weekly (starred review)

“Artful and compelling . . . Conan Doyle for the Defense will captivate almost any reader while being pure catnip for the devotee of true-crime writing.”—The Washington Post

“Developed with brio . . . [Fox] is excellent in linking the nineteenth-century creation of policing and detection with the development of both detective fiction and the science of forensics—ballistics, fingerprints, toxicology and serology—as well as the quasi science of ‘criminal anthropology.’”—New York Times Book Review

“[Fox] has an eye for the telling detail, a forensic sense of evidence and a relish for research.”—The Wall Street Journal

“Gripping . . . The book works on two levels, much like a good Holmes case. First, it is a fluid story of a crime. . . . Second, and more pertinently, it is a deeper story of how prejudice against a class of people, the covering up of sloppy police work and a poisonous political atmosphere can doom an innocent. We should all heed Holmes’s salutary lesson: rationally follow the facts to find the truth.”—Time

“Splendid . . . The ingredients are too good to pass up: a famous detective novelist actually playing detective, a man serving time for a murder he did not commit, and a criminal justice system slowly, and reluctantly, reckoning with the advent of forensic science.”—Sarah Weinman, The New Republic

“Expertly constructed, this work will appeal to Conan Doyle fans and is ideal for all true crime collections.”—Library Journal (starred review)

“Fox . . . does her own detective work in unpicking the opposing personalities and careers of her protagonists. . . . Like a good murder mystery, Conan Doyle for the Defense is a fast-paced read that twists and turns with the panache of a Holmes short story.”—The Times of London

“Fox shows the new system of forensic science, as typified by Doyle’s great creation Sherlock Holmes. . . . She wants us to see that the racialisation of crime is nothing new: bad science and economic insecurity have long been responsible for creating ‘out groups’ on whom we dump our worst terrors.”—The Guardian

“Fox expertly frames the case of Oscar Slater as another example of scapegoating. . . . If you are a Holmes devotee, you will love watching his creator take apart a flimsy criminal case through reason and meticulous examination of the evidence.”—The Seattle Times

“Fox’s engrossing book brings his case back to vivid life and highlights the part played in it by the creator of the world’s most famous detective.”—The Daily Mail

“Absorbing . . . Fox demonstrates her eye for the telling detail and her innate sense of pacing and suspense. . . . At a time when bias can and does still land innocents in jail, the relevance of the Slater case remains all too clear.”—The Jewish Week 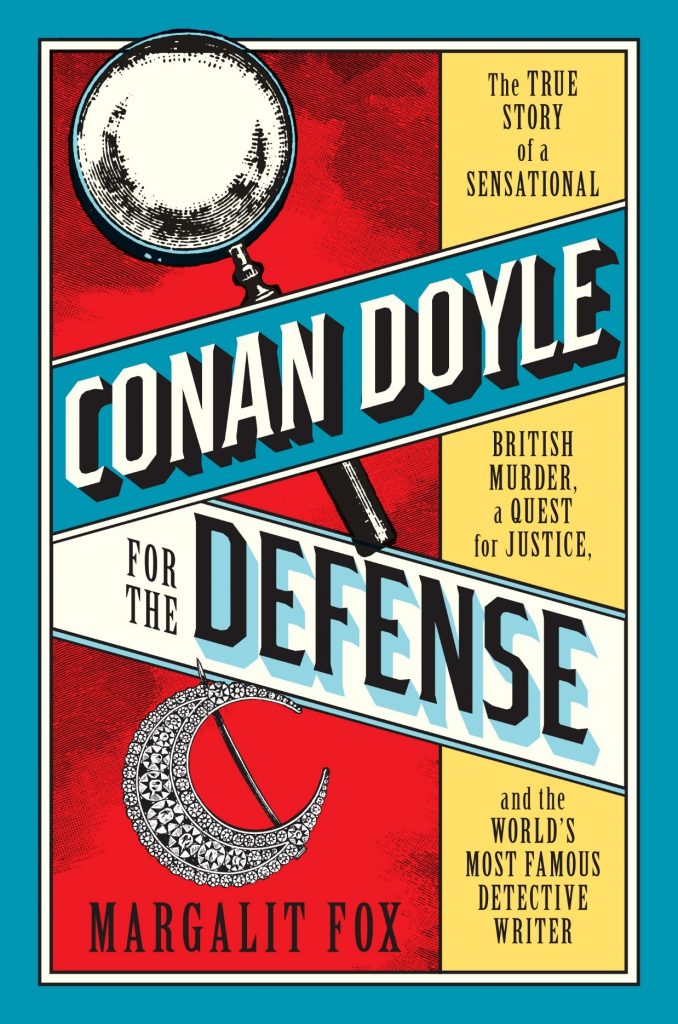 For all the scores of biographies of Arthur Conan Doyle, creator of the most famous detective in the world, there is no recent book that tells this remarkable story—in which Conan Doyle becomes a real-life detective on an actual murder case. In Conan Doyle for the Defense, Margalit Fox takes us step by step inside Conan Doyle’s investigative process and illuminates a murder mystery that is also a morality play for our time—a story of ethnic, religious, and anti-immigrant bias.

In 1908, a wealthy woman was brutally murdered in her Glasgow home. The police found a convenient suspect in Oscar Slater—an immigrant Jewish cardsharp—who, despite his obvious innocence, was tried, convicted, and consigned to life at hard labor in a brutal Scottish prison. Conan Doyle, already world famous as the creator of Sherlock Holmes, was outraged by this injustice and became obsessed with the case. Using the methods of his most famous character, he scoured trial transcripts, newspaper accounts, and eyewitness statements, meticulously noting myriad holes, inconsistencies, and outright fabrications by police and prosecutors. Finally, in 1927, his work won Slater’s freedom.

Margalit Fox, a celebrated longtime writer for the New York Times, has “a nose for interesting facts, the ability to construct a taut narrative arc, and a Dickens-level gift for concisely conveying personality” (Kathryn Schulz, New York). In Conan Doyle for the Defense, she immerses readers in the science of Edwardian crime detection and illuminates a watershed moment in the history of forensics, when reflexive prejudice began to be replaced by reason and the scientific method.